12 animals you can see in Galapagos Islands

Galapagos is an amazing destination, if you´re a nature lover, I´m sure you would love to visit these islands.  You know, these wonderful islands that emerged from the bottom of the sea in astonishing volcanic upheavals, the effects of which can still be observed today. Winds and competing ocean currents seeded life on this remote group of islands, creating the natural laboratory that compelled British naturalist Charles Darwin to develop his theories of evolution in the wake of his visit in 1835. His ideas shattered long-held basic concepts about life itself. Thanks to Ecuador’s visionary creation of the Galapagos Islands National Park in 1959, the islands may well be more pristine now than when Darwin walked their shores! From its namesake giant tortoises to dancing blue-footed boobies and albatross to marine iguanas – miniature aquatic dragons – to cavorting sea lions, the uniquely trusting wildlife of the Galapagos Islands will look you in the eye just an arm’s length away – connecting you to nature like nowhere else. Galapagos tours offer visitors a first-hand account of evolution and the opportunity to observe Galapagos iconic species, all in a place where nature shares its glory with humankind. Ok, but what species can we see if we visit Galapagos? Well, take a look to the following list:

Of course, it´s the Queen of the islands. This is the largest living tortoise species in the world. Because of these unique creatures, the Spanish named the archipelago as “Galapago” is an old Spanish word for tortoise. The shape of their shells changes depending on which island they live in and in Isabela from volcano to volcano. The Galapagos giant tortoise often lives beyond 100 years. This is another endemic species of the Island and an icon of the area!

As its name says, this iguana is only found in Santa Fe Island, a small island of 24 square km (9.3 square miles) located off the eastern coast of Santa Cruz Island. Santa Fe iguanas have perfectly adapted to blend in with the colors of their surroundings which may make it more difficult to observe than another type of Land iguana. Their plant base diet is mostly made of the island’s prickly-pear cactus. 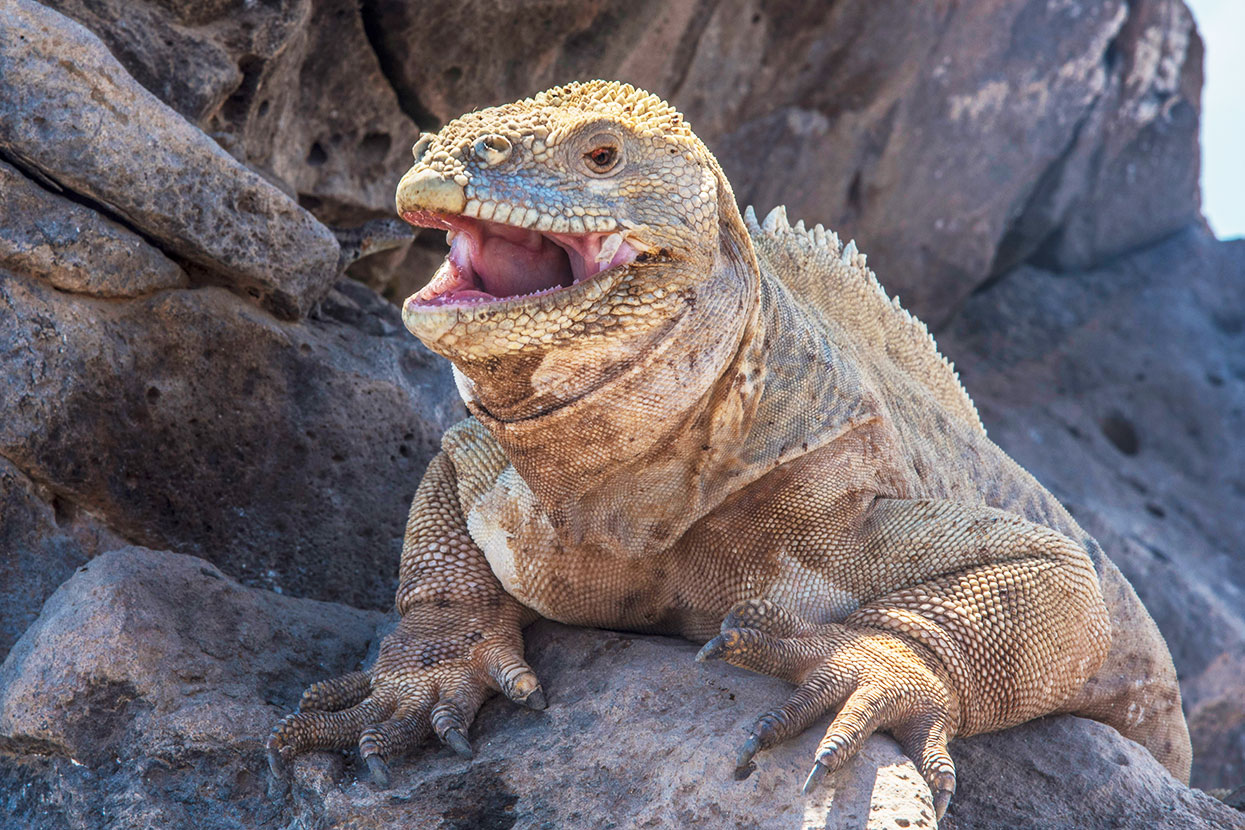 One of the most amazing of the endemic Galapagos species! Marine iguanas were referred as “imps of darkness” by Charles Darwin but their marine adaptations show a unique case of evolutionary biology. Marine iguanas can be found only in the Galapagos Islands. There are three species of marine iguanas and can be seen in Fernandina, Northern Isabela, Floreana and Española Island.

These are the most distributed of the three species of iguanas in the Galapagos Islands. Land iguanas have an important role as the endemic resident herbivores of the Archipelago. Their nesting periods differ depending on the island they are. Rare hybrids of land and marine iguanas have been spotted in South Plaza Island and both species can be seen there, side by side. 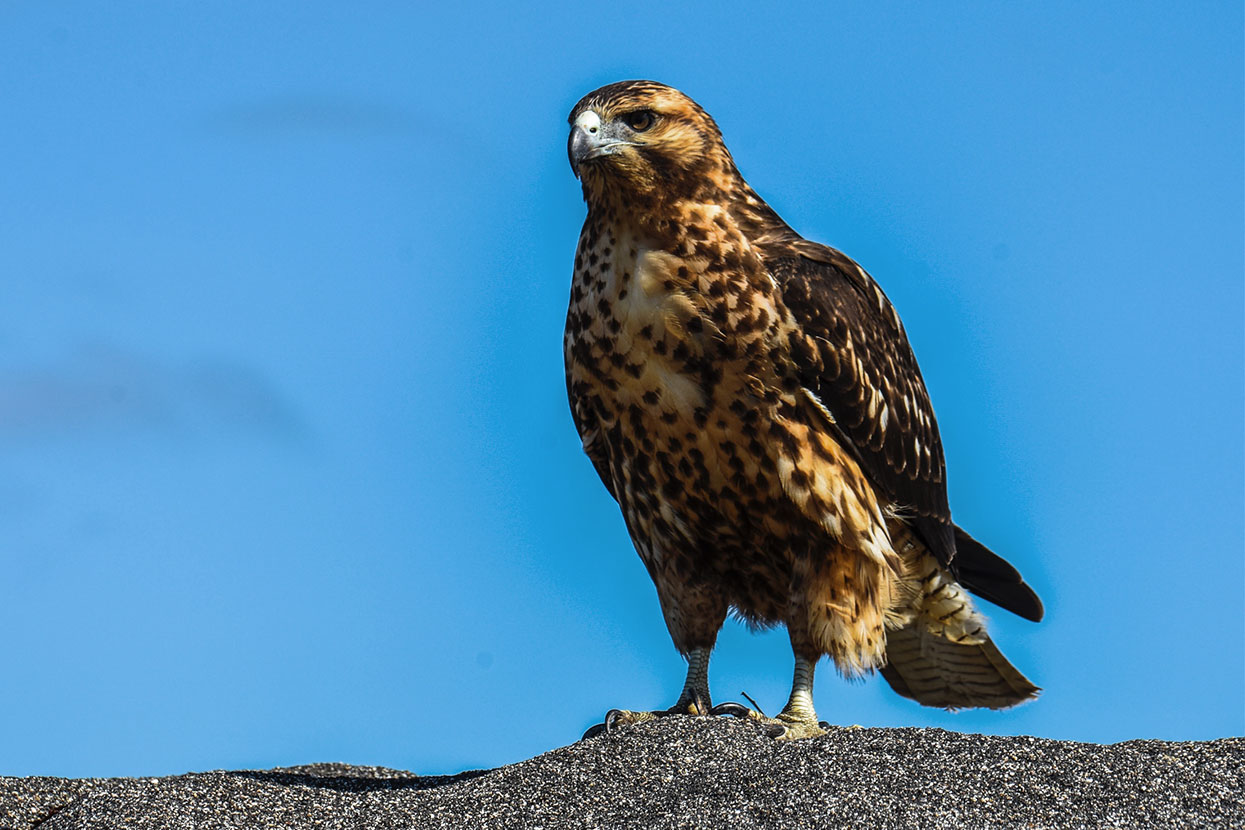 Don’t be mistaken by its size, the Galapagos hawk is the only predator in the Islands and the top animal of the food chain in the Enchanted Isles. This endemic bird is present in most of the Islands in the Galapagos and are generally unafraid of humans. They prey on young land and marine iguanas, hatchlings of tortoises, sea turtles as well as insects like locusts and centipedes.

The only penguins that live on the equator are the Galapagos penguins. It’s also the second smallest species of penguins in the world. Though they have no set breeding season, they can only lay eggs up to three times in a year and when food is abundant, they can raise two chicks in three months. Galapagos penguins have adapted to survive in the nutrient-rich water of the Galapagos archipelago.

This is the smallest of the sea lion species. The Galapagos sea lion is exposed to a greater heat and most likely to less food than other species found in colder-climates. These animals can be found all around the Galapagos Islands and they are also endemic to the archipelago. Visitors are likely to see sea lion pups throughout any time of the year thanks to its sporadic breeding season. 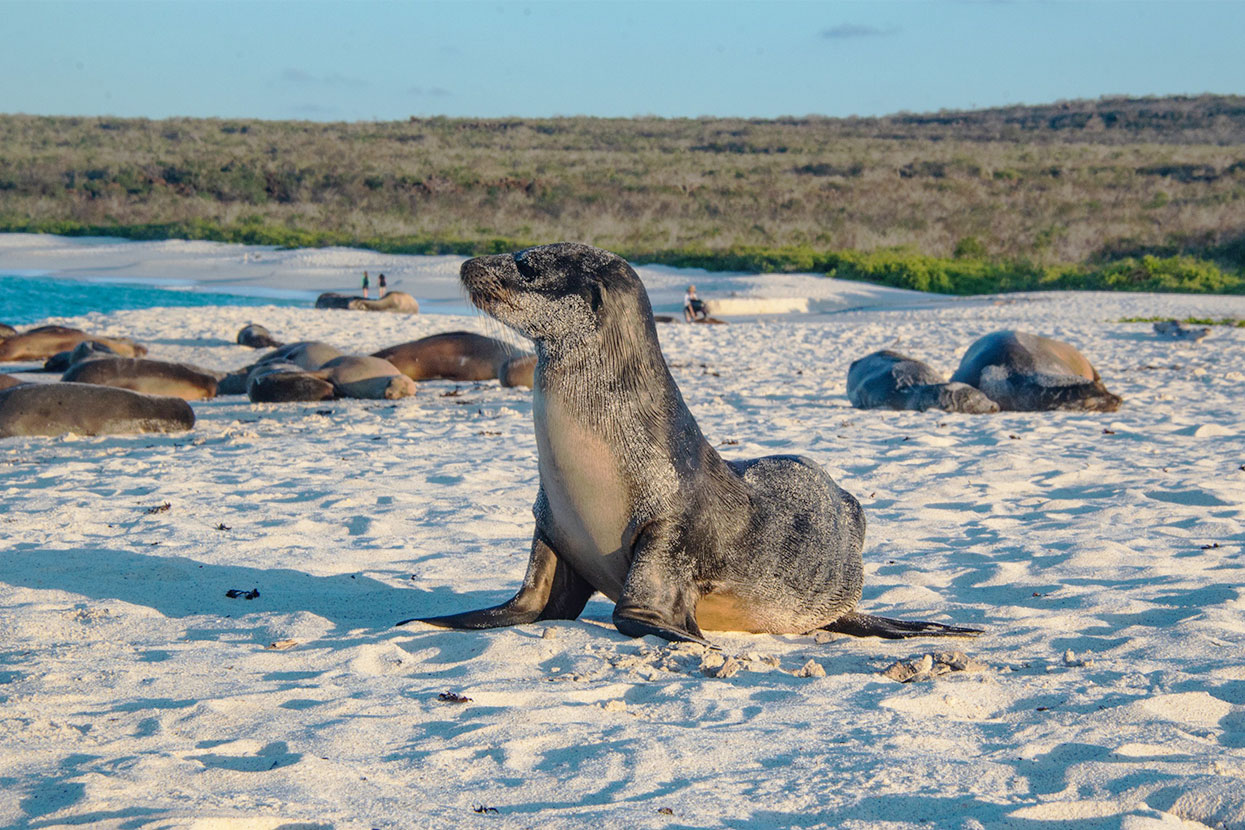 In no other place on Earth but the Galapagos Islands do both great and magnificent frigatebirds coexist. They are easily recognized for their black plumage (with subtle differences between species and genders) and their impressive crimson gular sac. Both species look for fish in the sea while flying, but they are also known to steal food from other seabirds.

Also known as the Galapagos flamingo, this impressive bird nests and forages on saline lagoons located on the islands of Isabela, Floreana and Santiago. They owe their beautiful pink hue to their diet, which consists mainly of shrimp, a crustacean containing carotenoids – a red pigment. They are found in small numbers and its population on the islands is considered highly vulnerable. 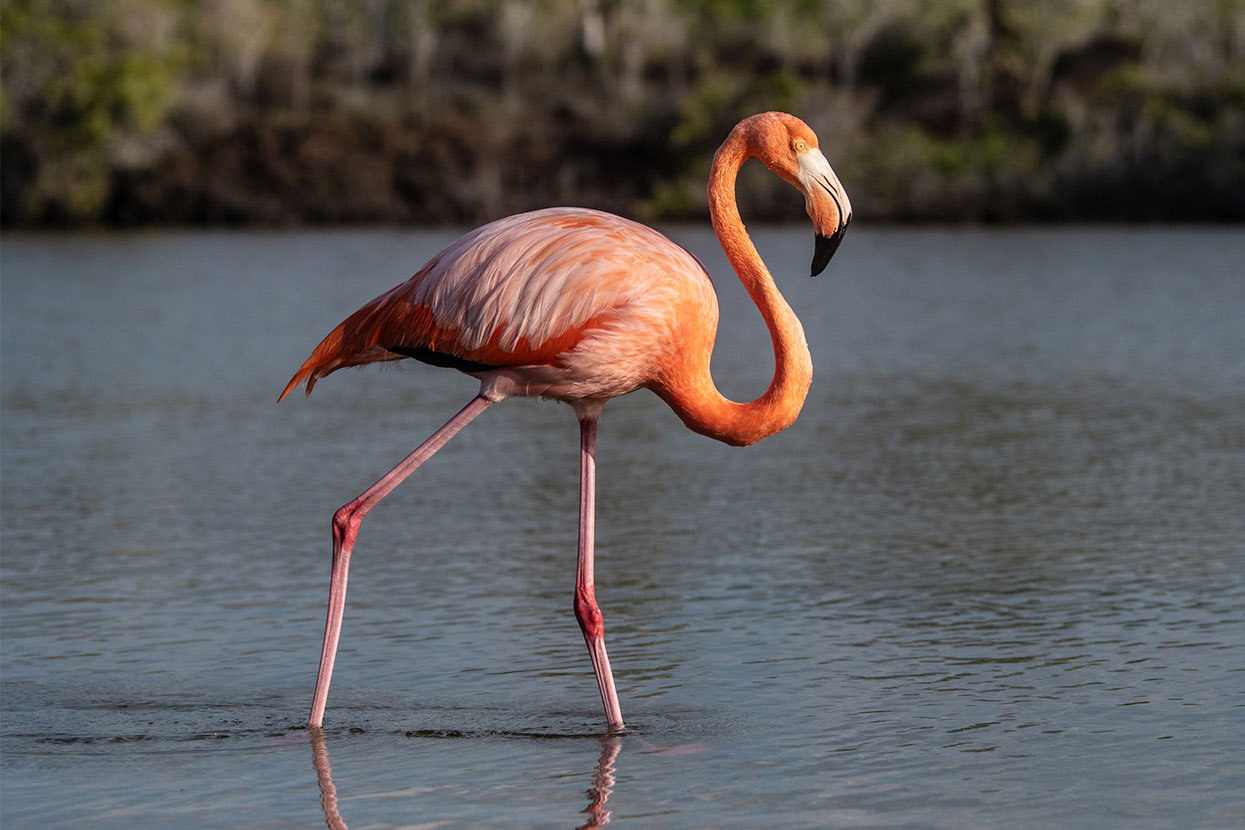 Found only on Fernandina Island and the western coast of Isabela Island, this species is a clear example of evolution. The only seabird in the world that has lost its ability to fly – except for penguins – in order to adapt to the requirements of life at sea. Its solid bones and plumage that feels more like fur than feathers, allow it to spend a longer time in the water looking for food.

This seabird is the smallest one in the booby family. Their special abilities on air and sea make them keen hunters and divers. Red-footed boobies nest atop branches of small bushes that grow by the coastlines of Genovesa Island, Punta Pitt on San Cristobal Island, and North Seymour. It’s the booby species with the biggest numbers but not the easiest to spot. 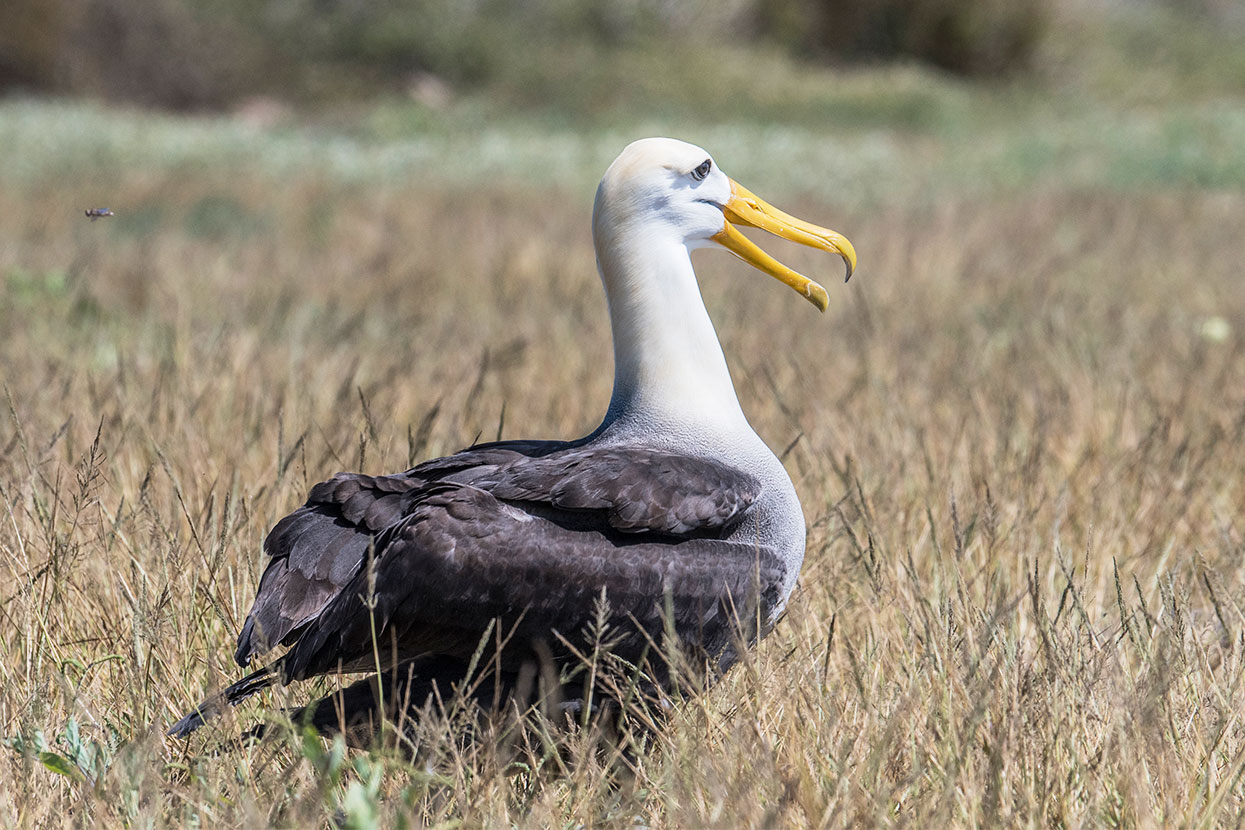 Galapagos Albatrosses – a seabird endemic to Ecuador – can be observed when they migrate back to the archipelago every year. Their impressive wingspan of approximately 4 meters (13 feet) and famous courtship dance are a sight to behold. Watch as they engage on an elaborate dance that includes sword fighting with their beaks. You will find them only on Española Island.