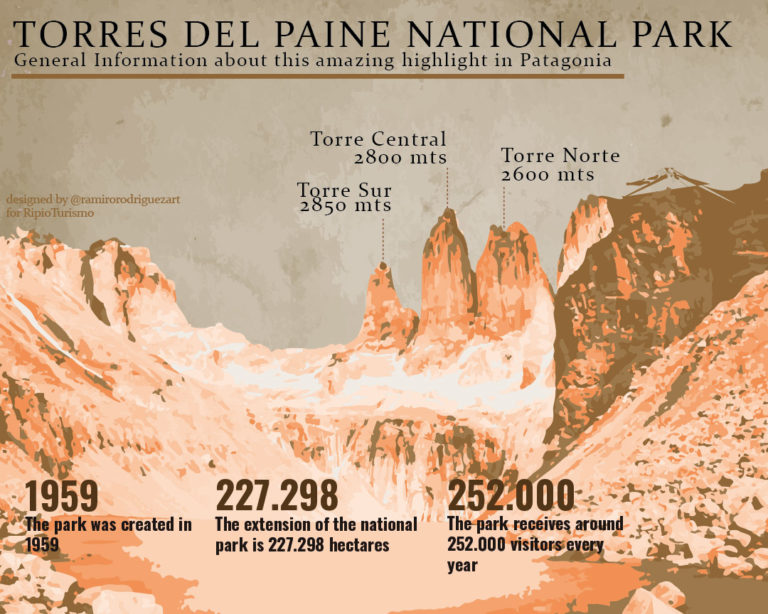 One of the most fascinating places to visit in Patagonia is Torres del Paine National Park.  Why? Well, for many reasons. First, a bit of history and geolocation: Torres del Paine National Park is located in the extreme south of Chile, in the Magallanes Region and the Chilean Antarctic. It was declared a Biosphere Reserve by UNESCO in 1978 and is considered the most important national park in Chile.

The park stands out for the protection of fauna species such as ñandú, tile, and owl. As for mammals, some of the 25 species present in the park are the puma, chingue, red fox, as well as different kinds of reptiles, amphibians, and fish. In terms of flora, there are 274 species of plants classified as Patagonian steppe, pre-Andean scrub, Magellanic forest (the lenga predominates), and Andean desert.

How the Torres del Paine were created?

The towers are eroded remains of a region raised by the seismic movement of this area millions of years ago. On the south side of Torres del Paine, the overlapping materials have been completely eroded, leaving only several tall, rounded granite towers - these are the actual towers of the park.

On the north side, some of the original materials remain and as these have a different slope and color, they form the tips of the "horns" seen in the image above. At times in the distant past the area was extensively glaciated; some glaciers remain on the east side of the uplift (left in the image) and form icebergs that flow some distance into the large, scenic Lake Pehoé.

The three Towers of Paine called in Spanish Las Torres, form the centrepiece of Parque Nacional Torres del Paine. The South Tower of Paine (about 2,500 m in elevation, is now thought to be the highest of the three, although this has not been definitely established. It was first climbed in 1963 by Armando Aste. The Central Tower (about 2,460 m) was first climbed in 1963 by Chris Bonington and Don Whillans. In 2017, three Belgian climbers, Nico Favresse, Siebe Vanhee, and Sean Villanueva O'Driscoll, made the first free ascent up the rock face (about 1,200 m ). The North Tower (about 2,260 m in elevation) was first climbed in 1958 by Guido Monzino.

Other summits include the Cuerno Principal, about 2,100 m in elevation and Cerro Paine Chico, which is usually quoted at about 2,650 m. 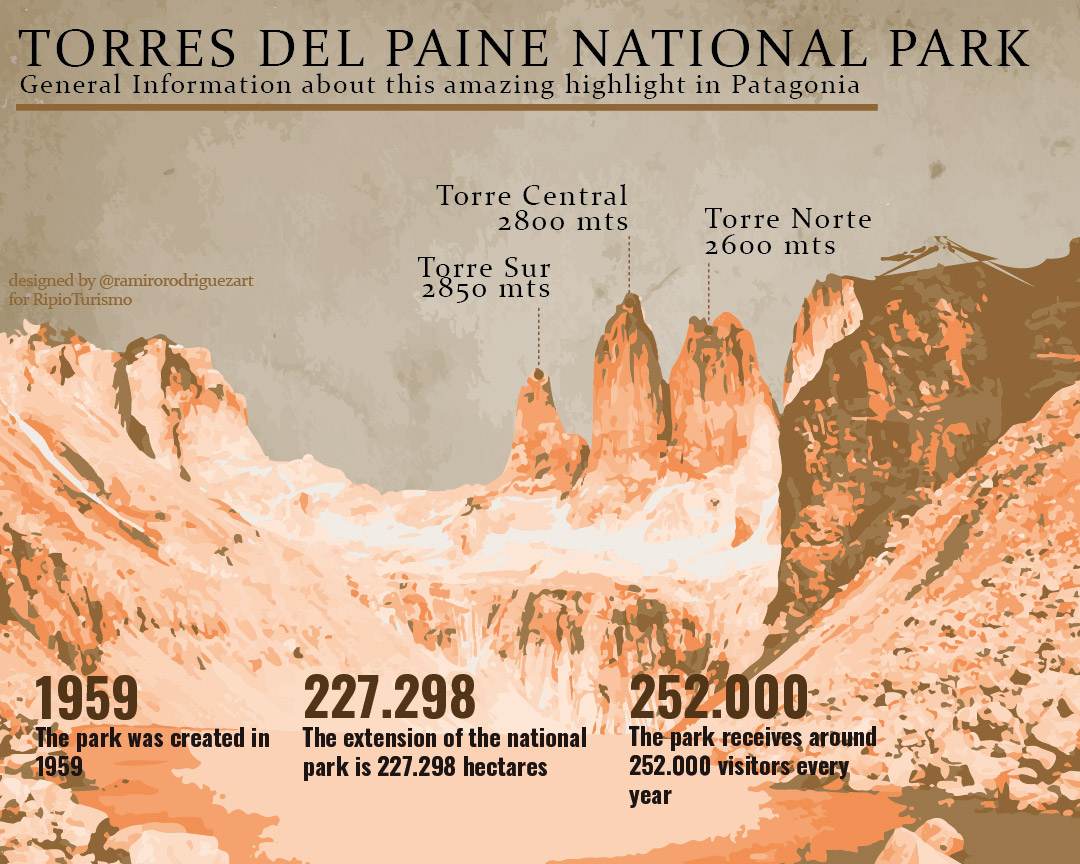 According to the Köppen climatic classification, the park is in the "temperate climate of cold rain without dry season". The meteorological conditions of the park are variable due to the complex orography. But you have to be prepared for harsh weather. Wind and strong sun are problems too, and the weather can go through four full seasons in the course of one day, as the locals say.

The rainiest months are March and April, with a monthly average of 80 mm of rain. This represents double the rainfall in July-October (winter), which are the driest months. A study of the exact chemical components of precipitation in the park has been carried out.

There are many options in this large amazing park, but the most famous and important trekkings are:

1 - The iconic "W" Trek that visits each of the park's most famous highlights. It´s a great experience, in a four days long hiking, and very important: it's achievable for anyone in good shape with some hiking experience! You can stay at the refuges available along the way.

2 - The most complete option, called "O" Circuit is ideal for more experienced hikers. On the O Circuit you can visit all the main highlights of the park, but also circle around the quieter northern edge of the park, where you'll have the stunning views almost to yourself.

Interested? Just click in the images below and see more information about this amazing W and O trekking in Torres del Paine National Park!